What we are reading in November-December, 2017

The last two months of 2017 we were a bit slow regarding our blog, but, finally we have something here… This time around, regarding mainly Glomeromycotina (sorry ectomycorrhizal folks! -though, some orchid mycorrhiza works are mentioned as well).

2017 was a great year for mycorrhizal research, besides the creation of our Network, the 9 th International Conference on Mycorrhiza (ICOM9) was held in Prague, Czech Republic, from 30th July to 4th Augusut, 2017. We were lucky enough to introduce our Network at ICOM9. Recently, a New Phytologist Meeting report was out regarding ICOM9. One of the main ICOM9 topics showed in this report is the evolution of the mycorrhizal symbiosis and its flexibility on lifestyles. Different perspectives are showed: from the appeareance (c. 400 million years ago) and functionality of arbuscular mycorrhizal (AM) fungi, to the 30 independent plant lineages in which ectomycorrhizal (ECM) fungi has appeared since some 200 million years ago, to the lost of the mycorrhizal lifestyle some 70 million years ago. Genomics and proteomics data showed, also, that some AM and ECM biochemical pathways are highly similar. A second major topic was the integration of the mycorrhizal symbiosis to the (soil-plant) community and ecosystem levels. After all, plant-soil feedbacks require or involve the interaction not just of fungi and plants, but the rhizosphere as a whole, as well as plant communities, bacteria, etc. For example, our Member Marcel van der Heijden (Agroscope and University of Zurich, Switzerland) used network imagery to show how different farming systems (organic vs conventional) shift microbial co-occurrence networks in ways that affect their function’. Finally, a third major topic regarded how to integrate the mycorrhizal symbiosis into macroecological approaches in plant functional ecology. 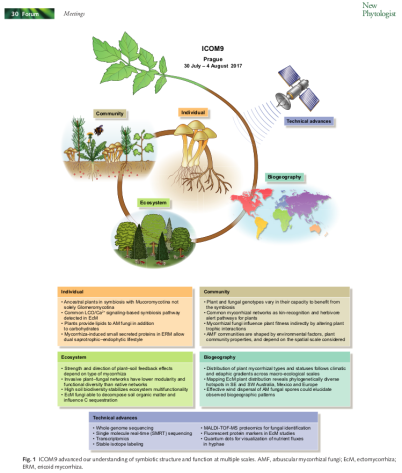 A major breakthrough in arbuscular mycorrhizal (AM) fungi research has been recently described in two Science papers: Jiang et al. (2017) shows that the AM species Rhizophagus irregularis obtains and consumes fatty acids through its symbiosis with the plant host; this fatty acids are also transferred to the plant pathogenic fungus Golovinomyces cichoracerum. Similarly, Luginbuehl et al. (2017) concludes that ‘in addition to sugars, lipids are a major source of organic carbon delivered to the fungus, and this is necessary for the production of fungal lipids. Finally, and reiterating the same finding, Keymer et al. (2017) used isotopolog profiling to show that the 13C fatty acids patterns of fungal AM symbionts are highly similar to those of the respective wild hosts (Lotus japonicus). L. japonicus mutants that lacked the genes to synthesize AM fatty acids (KASI and GPAT6 genes) did not show any lipid transfer to the AM symbiont. Check specially the Keymer et al. (2017) to see a bunch of cool photos, videos, phylogenies and pathways to see how this works!

Also at ICOM9, a very interesting session on the species concept of AM fungi was organized by two researchers with different points of view: Tom Bruns (UC Berkeley) and Maarja Opik

(University of Tartu). The session also included talks by Nicolas Corradi (University of Ottawa), John Taylor (UC Berkeley) and Dirk Redecker (Université de Bourgogne). Among the many issues discussed on this New Phytologist viewpoint regarding this session, the two points of agreement should be highlighted: first, the different disagreements can be solved with more multilocus data from AM fungi populations; and second, the different species concepts and methods are necessary and used for different purposes, which was also a point of agreement of the organizers in an exchange in Science (Bruns and Talylor, 2016; Öpik et al., 2016). For example, when studying AM community ecology, specially at large scales, the use of high throughput is almost-mandatory, and this method is limited by single locus identification. Among AM fungi, the most conserved locus is the SSU, which is also the most commonly used, to the point a database using this region and an utilitarian species concept (Virtual Taxa, VT; https://maarjam.botany.ut.ee/) is used based on it. Finally, difficulties on taxonomical analysis using AM spore traits were showed by Dirk Redecker -this difficulties sometimes remain even when using multilocus molecular data. In sum, some assumptions of the biology and species limits of AM fungi need to be re examined under the light of new molecular/genomic techniques, but more researchers are also need it to solve this issues!

A new family and new genera on Glomeromycotina

Using Bayesian analysis of Bayesian analysis of SSU–ITS–LSU nrDNA sequences, Janusz Błaszkowski and collaborators show in a recent paper (Błaszkowski et al., 2017), the existence of a new AM fungi family (Pervetustaceae) with a single species as representative (Pervetustus simplex), and of a new AM fungi genus (Innospora) with also a single representative (Innospora majewskii). 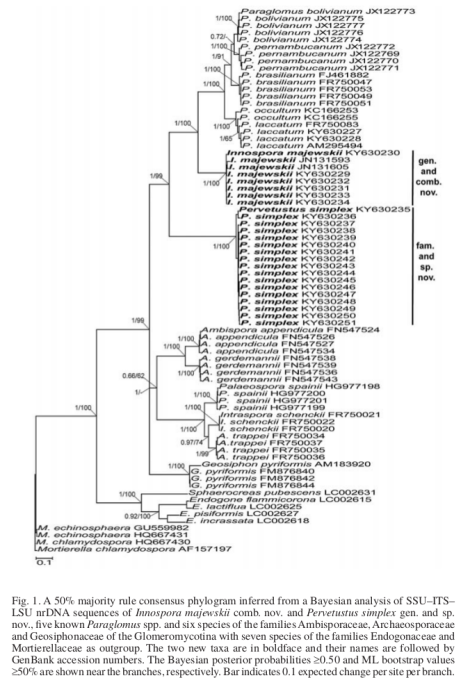 Our Member, Juan Pablo Suárez and his team recently published two Mycoscience papers: first (Novotná et al., 2018) they identify the orchid mychorrhizal fungal diversity of the epyphitic orchids Cyrtochilum myanthum, Scaphyglottis punctulata and Stelis superbiens from a tropical mountain rainforest in southern Ecuador, obtaining a total of 115 fungal isolates and 49 OTUs (nrDNA ITS and partial 28S region), from which Trichoderma sp. was the most common taxon. Secondly, and using the same study system, they (Herrera et al., 2018) found that Tulasnellaceae mycobionts were shared between epiphytic and terrestrial orchids.

Finally, and returning to AM fungi, recently Marín et al. (2017) investigated AM fungal diversity (based on spore morphology) on 14 Chilean temperate rainforests, both native conifers and Nothofagus forests located at Chilean coastal range and at Andes (different mountain systems). Native conifers in Chile are associated with AM fungi, while Nothofagus (but not the understory) are associated with ECM fungi (mycorrhizal dominance). 14 Glomeromycotina species were identified on the 7,120 AM fungal spores isolated from these 14 forests. Both mountain system and mycorrhizal dominance affected the AM community composition. Soil P, Ca, Mg and Na were the edaphic parameters affecting AM community composition. There was a significant relationship between altitude and AM fungi abundance (but not richness), probably due to the fact that two of the three native conifers examined (Araucaria araucana and Fitzroya cupressoides) usually constitute the treeline of these forests. With this work, a total of 59 Glomeromycotina species are reported for Chile; about a third of these species, which previously were reported just in agroecosystems are also present on temperate rainforests.